UK Typhoon aircraft BT17 will take to the skies at the RIAT show on July 8, 9 and 10 followed by this year’s Farnborough International Air Show, with BAE Systems Experimental Test Pilot Nat Makepeace at the controls.

“This is one of the first times a Typhoon aircraft has flown with this weapons fit and it demonstrates the significant milestones which have been achieved towards integration of these new capabilities on to Typhoon, providing the combat pilot with a full range of capabilities.

“Typhoon provides air forces with a highly capable and extremely agile multi-role combat aircraft, capable of being deployed in the full spectrum of air operations.
“This display will also demonstrate is that Typhoon, even with this weapons fit, loses none of the incredible agility and manoeuverability for which it is known.”

A significant contracted programme of work is currently being conducted by the Eurofighter Partner Companies, with the support of MBDA, Eurofighter GmbH and the UK Ministry of Defence, towards the integration Phase 2 and Phase 3 Enhancement packages for Typhoon.

Phase 1 Enhancements were delivered on to the aircraft last year, underlining Typhoon as a high-end multi-role weapon system with unmatched air-to-air capability and the integration of Paveway IV for precision air-to-surface operations.

Inside the ultimate test drive: How British test pilots put the Eurofighter
Typhoon through its paces

The jet’s power, speed and agility are all brought to the fore as test pilots, based at Warton, Lancashire, take the controls of each Typhoon for the first time – as soon as they roll out from the factory floor to the runway.

Known as Production Flight Acceptance Testing (PFAT), each Typhoon aircraft is pushed to its limits for up to 60 minutes, flying out from Warton over the Irish Sea at heights of up to 40,000 feet, reaching more than 1.6 times the speed of sound and handling at the most extreme G-forces 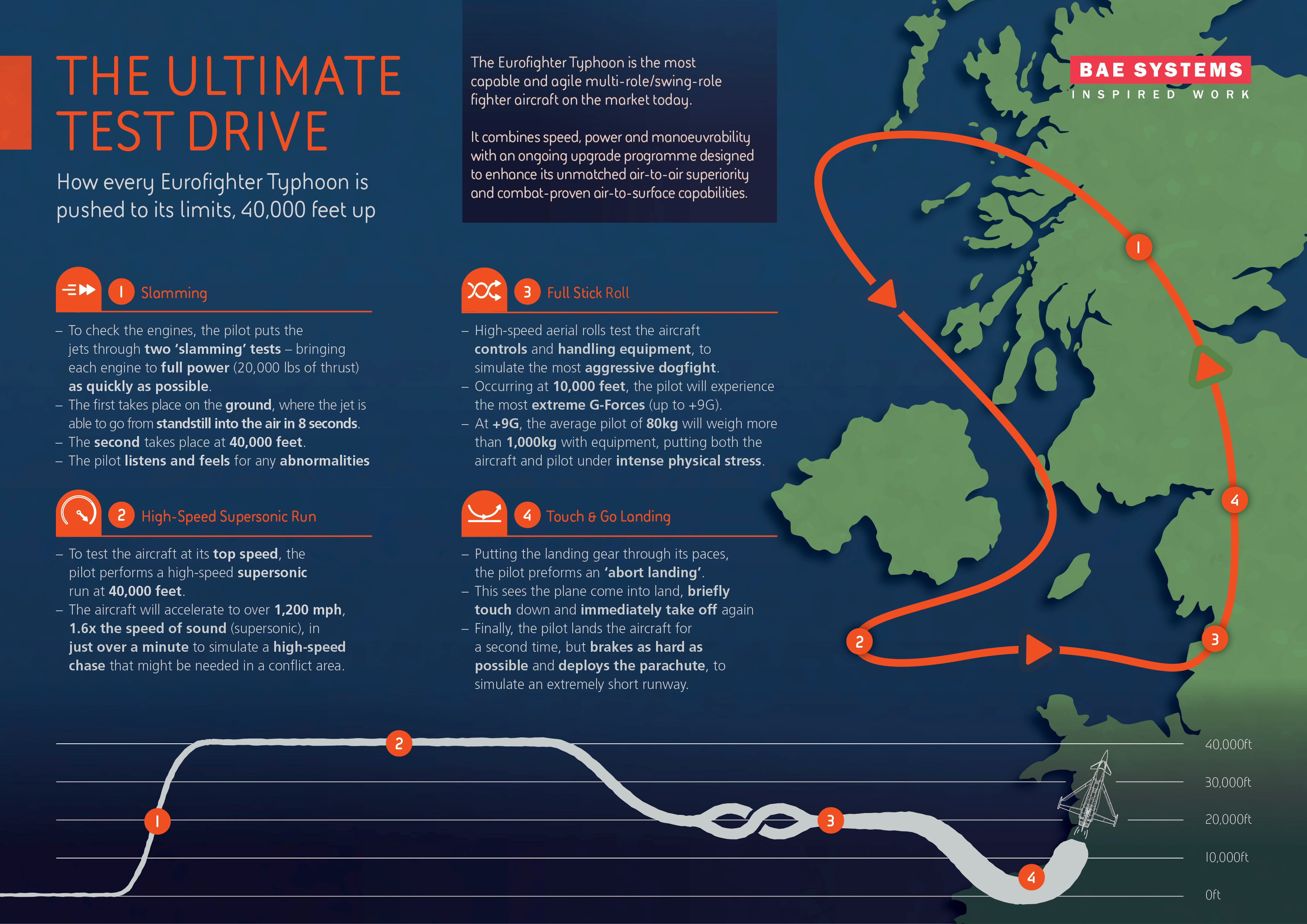 “The testing is all part of ensuring the performance of the engine is guaranteed. It is extreme flying but in a sense this is the whole point of a PFAT. We are giving the aircraft a thorough workout through all of its capabilities — at high speed and low speed and we slam the engines in a way that would not happen in normal flight.

“After making a rapid climb to 40,000ft I slow right down to a point where we can barely fly and then slam the engines into full throttle.

“This is one of the most critical test points because at 40,000ft you’d typically be flying at 0.9 Mach, but we are back at 0.5 Mach — that’s only 150 knots, which is not much more than landing speed. At this height the air is only a 10th of the density compared to ground level. Even in full reheat the aircraft struggles to stay level. You are moving in a very challenging way. We’re flying as slow as we can and then we slam the engines.”

Even before the pilot leaves the ground they take the nose wheel steering out to make sure the flight control system is working correctly before pulling straight into a steep reheat climb.

“We have to check the maximum and minimum G, that’s usually around +9g and -3g, at high supersonic flight to give the flight controls a full workout. That is phenomenal performance. You are basically going to the limits that the aircraft was designed for. You are doing things with the aircraft that would never normally be done by the aircrew, except perhaps in real combat situations.

“At 25,000ft I shut the engines off one at a time. It is the only time in normal service it occurs. We shut it off for a minute and then relight it again. Then you drop down to about 10,000ft and fly upside down for 30 seconds. Even a display pilot doesn’t normally do it for that long. Then I drop to 2,000ft and slam the engines again. This is one of the most dangerous phases because if anything was to go wrong you don’t have a lot of time to react.

“Even the first landing is extreme. I deploy the parachute and stamp on the brakes, which heats the brakes and tests the anti-lock system. Everything is beyond what you would do on a normal flight, but within cleared envelope of the aircraft.

“A PFAT is a high workload flight and it’s demanding for a pilot. It is the ultimate test drive. There’s constant noise and vibration and all the time you’re making notes, recording times, and moving on from test point to test point. It’s a discipline and one that’s carried out by every partner nation. There are more than 100 test points but you can split it into two parts: the aeromechanical, like the engines and controls, and then the systems and avionics.

“Testing the airframe and engines takes you to the limits of the aircraft’s design. We are testing to ensure the aircraft is safe. In essence, what we are trying to do is say the aircraft is built perfectly. PFAT is the pilot’s quality control stamp in what is otherwise an extremely complex engineering process. It is the aircrew saying the aircraft is ready to hand over to the customer.”

A UK Eurofighter Typhoon aircraft has successfully fired a SPEAR air-to-surface precision strike weapon for the first time in a flight trial conducted from BAE Systems’ site in Warton, Lancashire.

Following the launch, which took place at the UK Ministry of Defence’s Aberporth range, in Wales, the weapon transitioned to powered flight and completed a series of manoeuvres before reaching its pre-planned point of impact.

The Typhoon aircraft, which is subject to a continual programme of capability upgrades, has been designated as the test aircraft for trials and development of the weapon.

The success of this trial demonstrates the inherent flexibility of the Typhoon aircraft as a platform in supporting such a crucial phase of testing on this next generation missile - and further cements the strong relationship between BAE Systems, MBDA and the UK customer. The weapon operated exactly as expected during the trial and we are delighted to have supported such important step in further development of SPEAR using Typhoon.

The SPEAR missile is being developed to meet the UK’s Selective Precision Effects At Range Capability 3 (SPEAR Cap 3) requirement for the UK’s F-35 Lightning II aircraft, with the potential to equip Typhoon. SPEAR will precisely engage long range, mobile, fleeting and re-locatable targets in all weathers, day or night, in the presence of countermeasures, obscurants and camouflage, whilst ensuring a safe stand-off range between the aircrew and threat air defences.

The first release and successful flight of SPEAR from Typhoon is a real demonstration of the close working relationship between the MoD, BAE Systems, Qinetiq and MBDA. We can anticipate that SPEAR will deliver significant operational advantage to users, and a real and tangible capability advantage to any platform deploying this new precision strike weapon.

The test firing from the Typhoon was the culmination of trials work undertaken by MBDA to prove the weapon is ready to move to the next stage of development work, which will now continue through to 2020. SPEAR is one of a number of smart weapons which may be integrated on to the Typhoon aircraft to meet future operational requirements, including anti- ship missiles such as Marte-ER.

Flight trials of the E-Scan radar have begun following the successful completion of ground tests using a UK Eurofighter Typhoon test aircraft, clearing the path towards full integration of the radar.

The ground tests were carried out on Instrumented Production Aircraft (IPA) 5 with the detection and tracking of airborne targets at significant range.

Flight tests have now begun at BAE Systems’ site in Warton, Lancashire, where IPA5 undertook a flight of around one hour in duration on Friday 8 th July. A second test aircraft, IPA8 based in Germany, is also set to join the integration programme.

The trials are designed to ensure the radar and weapons system reach the required capability in time for first deliveries to the Kuwait Air Force, which became the aircraft’s eighth customer earlier this year.

Following the successful completion of this ground testing phase, flight testing using IPA5 has now commenced, where we will prove in-flight what we have successfully demonstrated during the ground tests. The industry teams across Europe are working very collaboratively to drive this key Typhoon capability programme successfully forward.

The Typhoon Captor-E provides significantly more power than most competing systems and we’re looking forward to demonstrating the combat edge this brings to the platform in live flight trials. Combined with the fighter's large nose aperture and the ability to move the radar antenna, the Typhoon has a field of view of 200 degrees and the flight tests will show the discriminating advantages this will bring.

The E-Scan Radar equipment and Weapons System capability will be incrementally enhanced over the next three years to enable the required capability (P3E Standard) to be available for the first deliveries to the Kuwait Air Force.

The new radar, provided by the Euroradar consortium, which is led by Leonardo-Finmeccanica, underpins the Typhoon’s current and future capability evolution.