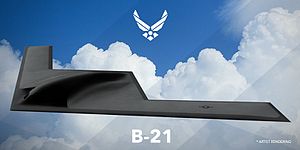 Notice of Intent To Prepare an Environmental Impact Statement for the B-21 Main Operating Base 1 (Mob 1) Beddown at Dyess Air Force Base, Texas or Ellsworth Air Force Base, South Dakota

The United States Air Force (Air Force) is issuing this notice to advise the public of its intent to prepare an Environmental Impact Statement (EIS) for the B-21 Main Operating Base 1 (MOB 1) Beddown at Dyess Air Force Base (AFB), Texas or Ellsworth AFB, South Dakota. The EIS will assess the...

Department of the Air Force, DoD.

The United States Air Force (Air Force) is issuing this notice to advise the public of its intent to prepare an Environmental Impact Statement (EIS) for the B-21 Main Operating Base 1 (MOB 1) Beddown at Dyess Air Force Base (AFB), Texas or Ellsworth AFB, South Dakota. The EIS will assess the potential environmental consequences of the proposal to beddown the Department of Defense's new bomber aircraft, the B-21 “Raider,” which will eventually replace existing B-1 and B-2 bomber aircraft.

Additional information on the B-21 MOB 1 Beddown EIS environmental impact analysis process can be found on the project website at www.B21EIS.com. The project website can also be used to submit comments. Inquiries and comments-by-mail regarding the Air Force proposal should be directed to Dyess AFB Public Affairs, ATTN: B-21 EIS, 7 Lancer Loop, Suite 136, Dyess AFB, TX 79607; (325) 696-4820; [email protected]; or Ellsworth AFB Public Affairs, ATTN: Steve Merrill, 28th Bomb Wing Public Affairs, 1958 Scott Dr., Suite 4, Ellsworth AFB, SD 57706; (605) 385-5056; [email protected]. Comments will be accepted at any time during the environmental impact analysis process. However, to ensure the Air Force has sufficient time to consider public input in the preparation of the Draft EIS, scoping comments must be submitted to the website or mailed to one of the addresses listed above by April 24, 2020.

The beddown of the B-21 will take place through a series of three Main Operating Bases (MOB), referred to as MOB 1, MOB 2, and MOB 3. The Air Force proposes to beddown MOB 1, which includes two B-21 Operational Squadrons, a B-21 Formal Training Unit (FTU), and a Weapons Generation Facility (WGF) in this EIS. MOB 2 and MOB 3 beddown locations would be evaluated in future NEPA analyses, after the location for MOB 1 is chosen. The B-21 will operate under the direction of the Air Force Global Strike Command. The B-21 will have both conventional and nuclear roles and will be capable of penetrating and surviving in advanced air defense environments. It is projected to enter service in the 2020s, and the Air Force intends to have at least 100 B-21 aircraft built.
The purpose of the Proposed Action is to implement the goals of the National Defense Strategy by modernizing the U.S. bomber fleet capabilities. The B-21 Raider is being developed to carry conventional payloads and to support the nuclear triad by providing a visible and flexible nuclear deterrent capability that will assure allies and partners through the United States' commitment to international treaties. The B-21 will provide the only stealth bomber capability and capacity needed to deter, and if necessary, defeat our adversaries in an era of renewed great power competition. MOB 1 will support training of crewmembers and personnel in the operation and maintenance of the B-21 aircraft in an appropriate geographic location that can provide sufficient airfield, facilities, infrastructure, and airspace to support the B-21 training and operations.
The EIS will analyze Dyess AFB and Ellsworth AFB as basing alternatives for MOB 1 for the Proposed Action, as well as a No Action Alternative. The basing alternatives were developed to minimize mission impact, maximize facility reuse, minimize cost, and reduce overhead, as well as leverage the strengths of each base to optimize the B-21 beddown strategy. The potential impacts of the alternatives and the No Action Alternative that the EIS may examine include impacts to land use, airspace, safety, noise, hazardous materials and solid waste, physical resources (including earth and water resources), air quality, transportation, cultural resources, biological resources, socioeconomics, and environmental justice. The Air Force is preparing this EIS in accordance with the National Environmental Policy Act (NEPA) of 1969; 40 Code of Federal Regulations (CFR), parts 1500-1508, the Council on Environmental Quality (CEQ) regulations implementing NEPA; and the Air Force's Environmental Impact Analysis Process (EIAP) as codified in 32 CFR part 989.
Scoping and Agency Coordination: The scoping process will be used to involve the public early in the planning and development of the EIS, to help identify issues to be addressed in the environmental analysis. To effectively define the full range of issues and concerns to be evaluated in the EIS, the Air Force is soliciting scoping comments from interested local, state, and federal agencies and interested members of the public.


The Air Force will hold six scoping meetings to inform the public and solicit comments and concerns about the proposal. Scoping meetings will be held in local communities surrounding Dyess and Ellsworth AFBs. Scheduled dates, locations, and addresses for each meeting will be published in the Rapid City Journal and Black Hills Pioneer newspapers in South Dakota, the Abilene Reporter News and The Wylie News newspapers in Texas, as well as the Native Sun News, Indian Country Today and the Original Briefs tribal newspapers, a minimum of fifteen (15) days prior to each meeting.