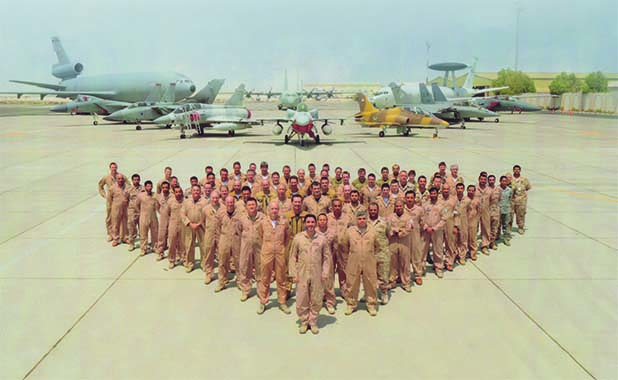 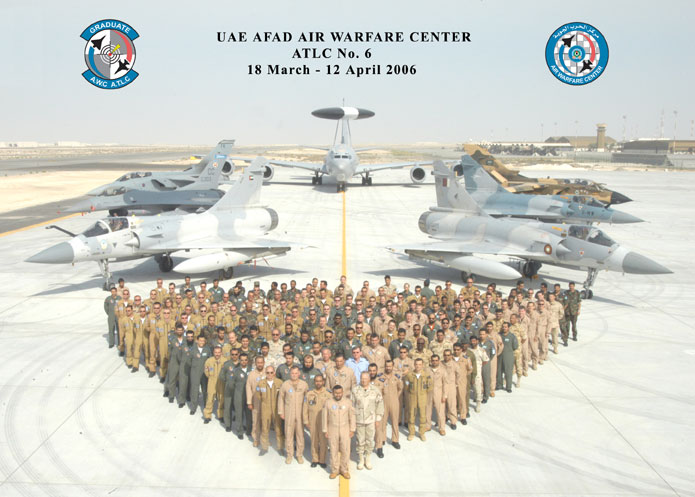 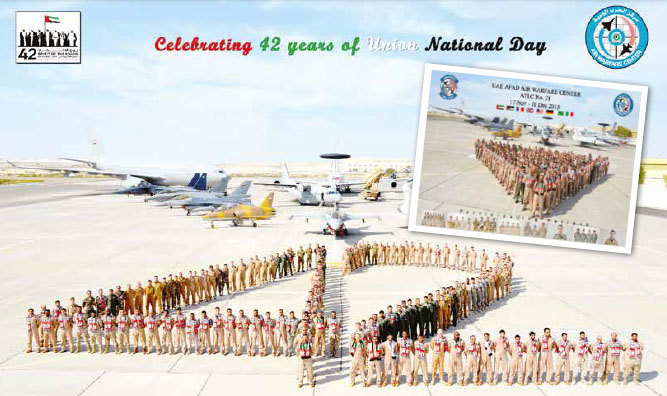 Jon Lake reports on Al Dhafra airbase in the UAE and the exercises that help allied forces with realistic training scenarios. 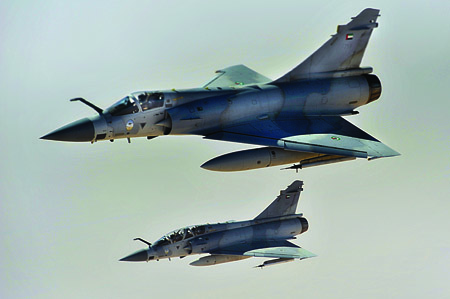 This year’s Advanced Tactical Leadership Course (ATLC) saw fighter pilots from the UAE, Jordan, Pakistan, France, the UK and the USA undertaking one of the most serious and realistic training opportunities available to today’s military aviators.

The latest ATLC exercise attracted international attention, as it hosted historic first meetings between the Lockheed Martin F-22 Raptor and the Dassault Rafale, as well as providing the arena for engagements between the Rafale and other fighters, including the rival Eurofighter Typhoon.

There was a time when realistic exercises for non-US fighter pilots meant a rare guest slot at the USAF’s Red Flag at Nellis Air Force Base, Nevada, or a place on NATO’s Allied Air Forces Central Europe tactical leadership programme (TLP). Today, opportunities for such training have expanded dramatically, with many more air forces participating, and with new venues and hosts, several of them in the Middle East.

These include Turkey’s Anatolian Eagle exercise, Jordan’s Falcon Air Meet as well as the UAE’s ATLC, arguably the biggest and best such exercise in the region, held at the United Arab Emirates Air Warfare Centre at Al Dhafra Air Base after the Dubai Airshow.

The airbase at Al Dhafra is a joint UAE and USAF facility and is home to most of the United Arab Emirates’ fighter squadrons – with F-16E/Fs and Mirage 2000-9s, which provide ‘built-in’ ‘red air’ forces. There is also a French enclave at Al Dhafra, known to the Armée de l’Air as Base Aerienne 104, and this hosts a rotational detachment of Dassault Mirage 2000-5s from EC 1/2 Cigognes, normally based at BA102 Dijon Longvic.

The UAE Air Warfare Centre was established in 2000; the first facility of its kind in the Middle East. It was established to allow doctrine, tactics, techniques and procedures to be developed and evaluated for the UAE’s own new fighters but its role was soon expanded to improving interoperability among Gulf Co-operation Council air forces and the air forces of their coalition allies. This was intended to promote the security and stability of participating nations.

The Centre’s flagship advanced tactical leadership course was modelled on NATO’s TLP. It aims to facilitate integration and interoperability between participating air forces through the development of leadership skills in the participating pilots, who are taught how to employ multinational forces together to achieve mission success. The course takes pilots who are already qualified to lead a ‘four ship’ (four aircraft formation), and upgrades them to full ‘mission commander’ status, giving each student experience of commanding, planning and executing missions in realistic scenarios, with the syllabus moving through progressively more complex missions and more challenging scenarios.

The first AWC course was held in January 2004. Initially, participation was limited to the UAE AFAD, the United States Air Force and the UK Royal Air Force, with the French Armée de l’Air (AdlA) joining for the third course. Qatar and Saudi Arabia joined for the fourth course in April 2005. Today, the AWC serves all GCC countries, and there have been reports that the UAE hopes to include Italy and Germany “in the near future”.

Though established and run by the UAE Air Force, the centre operates to the very highest international standards and management is shared between participating nations, with foreign air forces providing key personnel on the staff.

The UAE ATLC offers its participants a host of advantages, by comparison with other existing training exercises, such as NATO’s TLP and the USAF’s ‘Red Flag’ exercises.

Captain William Broman of the ‘Swamp Foxes’, one of this year’s participating pilots, judged that: “The value of ATLC is in its uniqueness. ATLC stands alone as an exercise combining, as it does, elements of Red Flag and TLP. Countries that could not deploy to the United States or Europe are able to deploy to the UAE. This makes it an outstanding opportunity to fly with and/or against dissimilar aircraft, providing invaluable experience for our pilots and maintainers. Experience is everything to the warfighter.”

The AWC has access to training airspace that is three times larger in area and volume than that used for Red Flag, much less restricted by civil air traffic requirements and with minimal manoeuvre and electronic warfare restrictions for participating aircraft. It allows the use of combat tactics that could not be properly practiced in more restricted airspace.

Al Dhafra enjoys excellent weather, so that missions hardly ever need to be cancelled. During the first four courses at Al Dhafra, for example, only one mission had to be cancelled due to bad weather, whereas at TLP up to 50 per cent have had to be scrubbed due to weather restrictions.

But Al Dhafra is more than just an airfield with good weather, conveniently located to great training airspace. The base is exceptionally well equipped for its role, boasting all the latest generation range instrumentation infrastructure and debriefing facilities. Participating aircraft carry an ACMI (air combat manoeuvre instrumentation) pod which records aircraft and flight parameters and downlinks them to the ground. This allows precise real-time monitoring of all missions, down to the level of individual aircraft, enhancing flight safety and allowing accurate assessment of simulated missile shots. Participating aircraft are tracked in real-time and can be “kill removed” if the range training officers (acting as exercise referees) judge that they have been “shot down”.

As a result, places on the ATLC course are highly prized and are eagerly sought after. Air Vice Marshal Greg Bagwell, Air Officer Commanding the RAF’s No.1 Group, told Arabian Aerospace about the importance of ATLC to the UK: “The UAE is a key regional ally for the UK and it remains a very high priority for security co-operation. The Royal Air Force was, with the USAF, one of the original participants in the excellent training courses offered by the UAE Air Warfare Centre in 2004 and, since then, we have placed ever-greater value on the opportunities that ATLC affords us.

“RAF participation in ATLC represents far more than a token means of reassuring the UAE of our commitment. The RAF gains great training benefit from the realistic, rigorous and demanding training that ATLC provides, and it is already a key part of enhancing the operational capability and preparedness of the RAF Typhoon force. It gives our pilots a great opportunity to train with their regional allies and, in so doing, to understand and appreciate the very high level of professionalism and operational competence that exists within the UAE Air Force’s F-16 and Mirage 2000 squadrons.

“The Prime Minister himself visited No.11 Squadron as it participated in ATLC in 2008, and this gives a good illustration of the enthusiasm for such co-operation with the UAE Air Force and Air Defence at the very highest level.”

A six-aircraft deployment of F-22As from the 1st Fighter Wing’s 27th FS (‘Fightin’ Eagles’), Langley AFB participated in bilateral training opportunities with some of the coalition partners during the same period, but these did not participate in the main exercise.

For the two US units at Al Dhafra, the exercise was known as Operation ‘Iron Falcon’.

As well as flying together, most of the participating nations took their turn flying as the enemy, or ‘Red Air’. Captain William Broman, an F-16 pilot from the 169th Fighter Wing, told Arabian Aerospace: “The ‘opposition’ was very competent and posed significant tactical problems to solve. I was very impressed with the Typhoon and how it was employed during the exercise, while the UAE F16 block 60 E/F models represent the top of the F16 evolutionary tree.”

The UAE Air Force and Air Defence intends that the AWC and the ATLC should continuously evolve, with further upgrades and improvements to equipment and infrastructure, ensuring that it remains a first-class global facility.

There is a determination at the highest level that ATLC will never simply provide training using scenarios that replicate past air campaigns but will, instead, continue to create the most relevant and challenging tactical scenarios for its participants, forcing them to use innovative and imaginative tactics. The ATLC will continue to emphasise integrated operations between multiple air forces and will develop scenarios that require the application of offensive airpower in direct support of ground operations, especially those that require participants to employ time sensitive targeting (TST) against ‘fleeting’ targets. This will ensure that ATLC provides the most relevant training for its participants, adding greater value than other available exercises and courses.

This year’s participating pilots rated ATLC very highly. Captain William Broman of the ‘Swamp Foxes’ concluded: “The UAE’s political and military commitment to ATLC is impressive. They have great leadership with the proper focus and a real vision for the future of the exercise.” 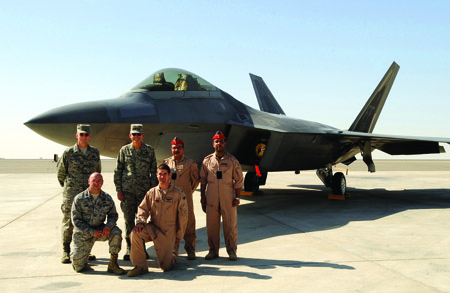 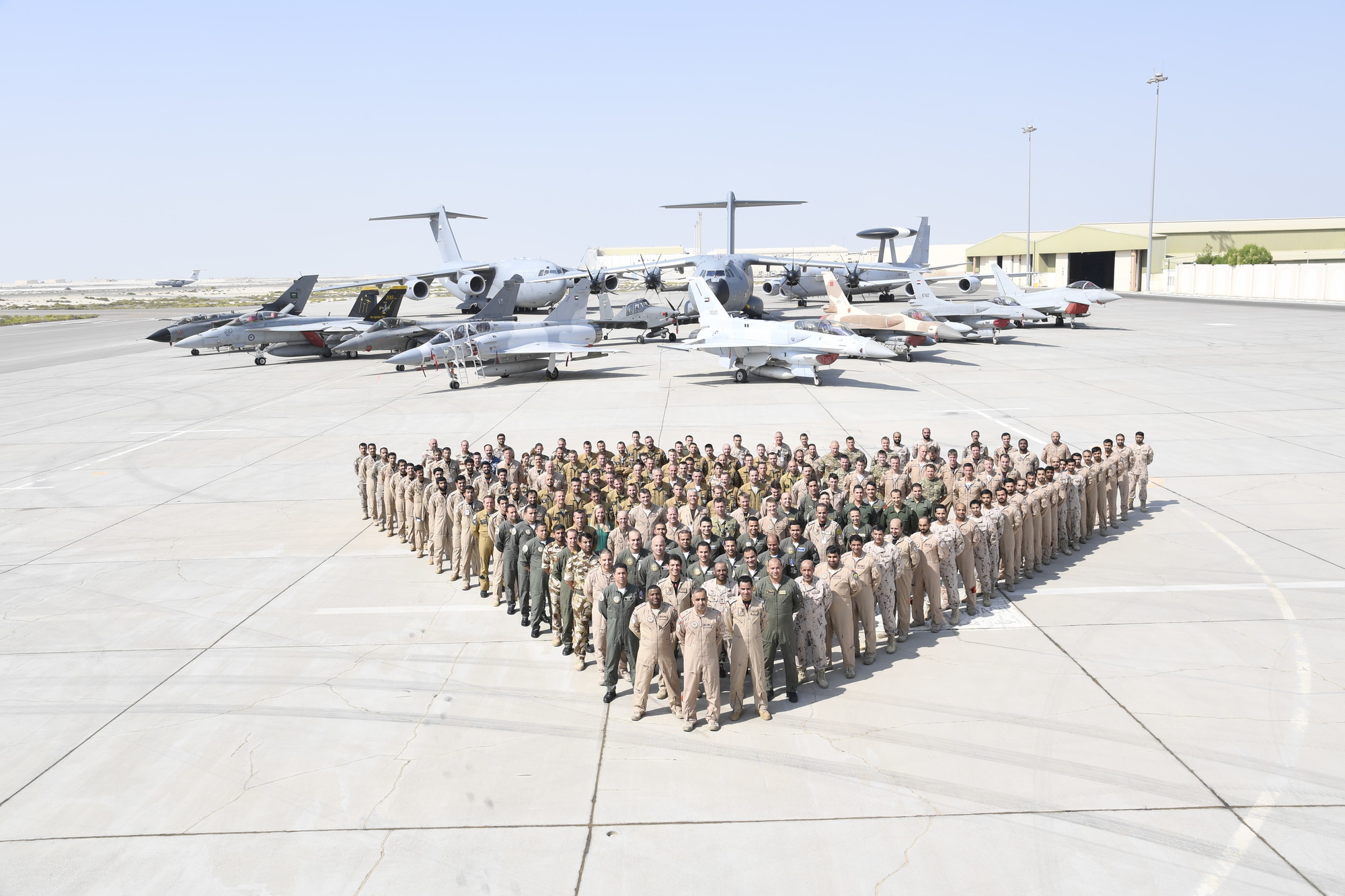