Fixed-wing aircraft carrier aviation is not cheap, and short takeoff and vertical landing (STOVL) aircraft have a limited ability to bring back unspent fuel and ordnance to the ship after a mission is completed. This means good gas gets dumped, and even worse, weapons that cost thousands to hundreds of thousands of dollars get jettisoned into the sea.

The Royal Navy wants their F-35Bs to be able to the return to the ship with more gas and weapons than they normally could by landing vertically on the decks of their two new Queen Elizabeth classaircraft carriers. The aim is to accomplish this by making a slow-speed—57 knots indicated airspeed to be exact—rolling recovery down the ship's landing and departure area, instead of a vertical landing. Officially this hybrid maneuver, which uses lift from the aircraft's wings and thrust from its engine and lift fan, has been dubbed a "Shipborne Rolling Vertical Landing," or SRVL for short.

Another advantage of standardizing this recovery concept is that it will put less wear and tear on the F-35B's costly lift fan and its associated subsystems and linkages—a move that could potentially save large sums of money over the aircraft's operational life. It would also help alleviating thermal wear on the HMS Queen Elizabeth and HMS Prince of Wales titanium injected deck coatings.

And why not do it? The Royal Navy spent a lot of money building massive carriers for STOVL aircraft that can operate from much smaller ships. The ability to field this maneuver operationally, and to bring back more gas and munitions while prolonging hardware life could be another set of reasons used to justify those costs.

UK F-35B pilots have been working on perfecting this landing concept in the simulator, a video of which you can see below. Make sure you have the audio on so you can hear the play-by-play narration. Also note the little pictograph of the F-35 in the lower left corner of the Helmet Mounted Display's virtual HUD. It appears to show show the pilot the lift fan and main engine RPM. Pretty neat stuff.
The AV-8B Harrier also executes rolling landings, but its propulsion concept is totally different than the F-35B's. The Harrier relies on swiveling nozzles, two hot and two cold, along the sides of its fuselage, instead of a large geared lift fan linked to the jet's main engine and an elaborate swiveling main exhaust nozzle as found on the F-35B. Harriers usually make these rolling landings on runways and they are not common practice for shipboard operations. As for the possibility of adapting this same technique for F-35B operations aboard US "Gator Navy" LHD and LHAs, that's uncertain, although the operating and parking areas are much tighter on those ships than they are on the Royal Navy's Queen Elizabeth class carriers.

The difference in landing weight margin this recovery concept will afford the F-35B also isn't clear. The F-35B's takeoff and landing weight metrics are fairly opaque, but the B model cannot carry 2,000lb weapons internally, with its smaller bays capable of carrying 1,000lb class and smaller weapons. But for most missions the F-35B won't need stealth and can carry a larger and more diverse load of munitions and stores on its wing and centerline stations. In that case, clearly bring-back capability will be a major issue. 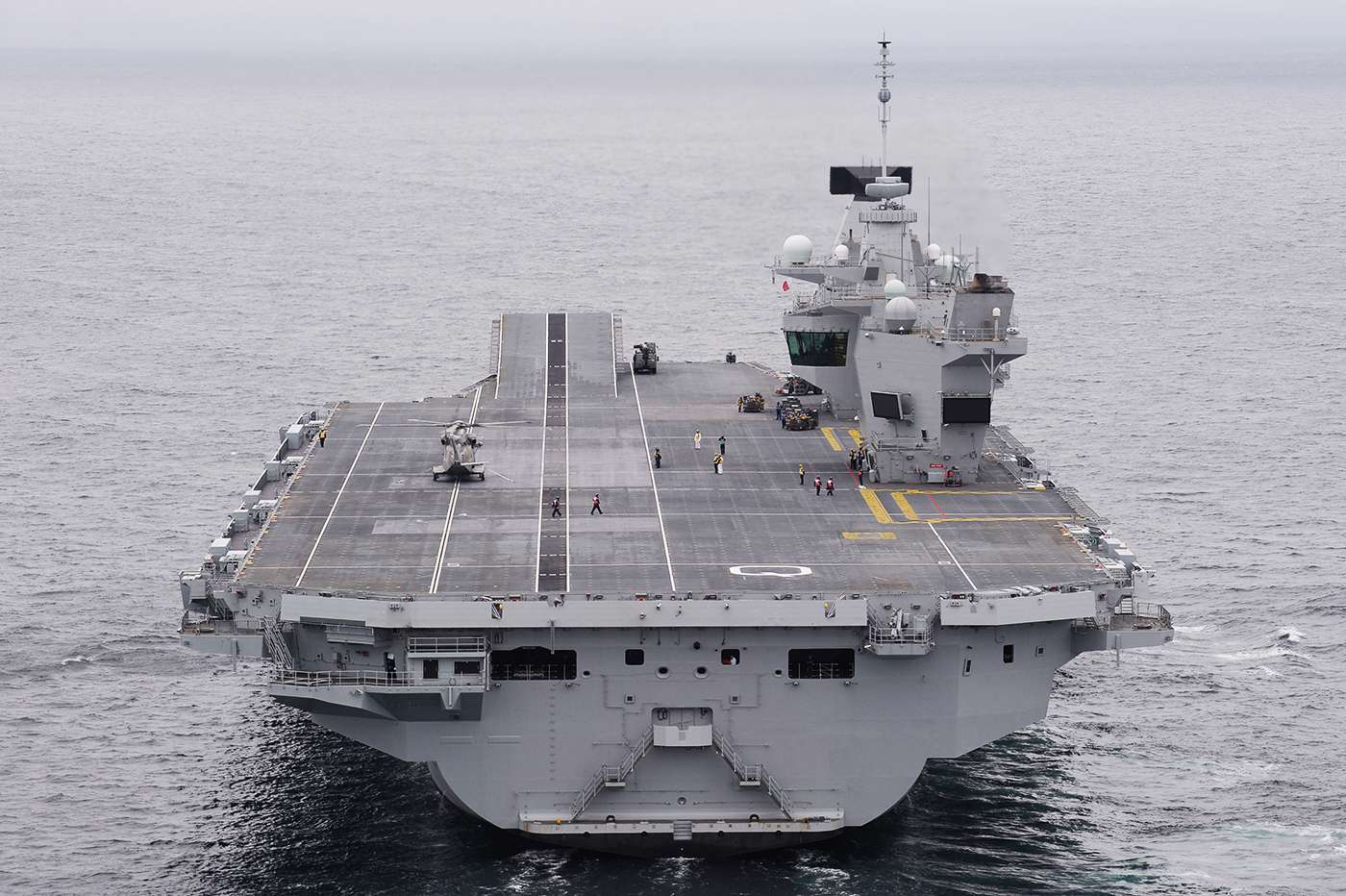 AP
The deck of the HMS Queen Elizabeth is roomy to say the least.

Being able to land with more gas saves money and helps with logistics because that fuel can be used on another mission. But most importantly, it also increases the safety margins for F-35 pilots—especially when operating from the ship in adverse weather.

Video shows F-35B training on a mock-up of a LHD deck and superstructure near Yuma, Arizona. The F-35B normally lands aboard a ship just like the Harrier, approaching slowly from the left over the water, stabilizing in hover and then moving laterally over the deck, before decreasing thrust until the aircraft touches down in its landing spot:
This method of recovery may be able to allow F-35Bs to better integrate with the operations of catapult and barrier arrested recovery aircraft carriers—specifically the US Navy's nuclear powered supercarriers. At this time there aren't any plans to integrate the F-35B model into the supercarrier's air wing, although the possibility of doing so was was briefly evaluated. Operational issues with the F-35B's launch, and especially its recovery cycle, and the fact that the B model is less capable in terms of range and payload than the C model, left Navy and Marine planners with the conclusion that cross-decking the B model to supercarriers wasn't a great idea.

The Harrier was evaluated for a similar arrangement, even being deployed at the squadron level with a carrier air wing early on. Even though it did operate from the Navy's big flattops on a few occasions decades later, the concept really never took hold. But maybe there is a possibility that the F-35B's story could be different due to this new recovery method, which could allows the B model to better fit into high-tempo the ship's recovery flow. 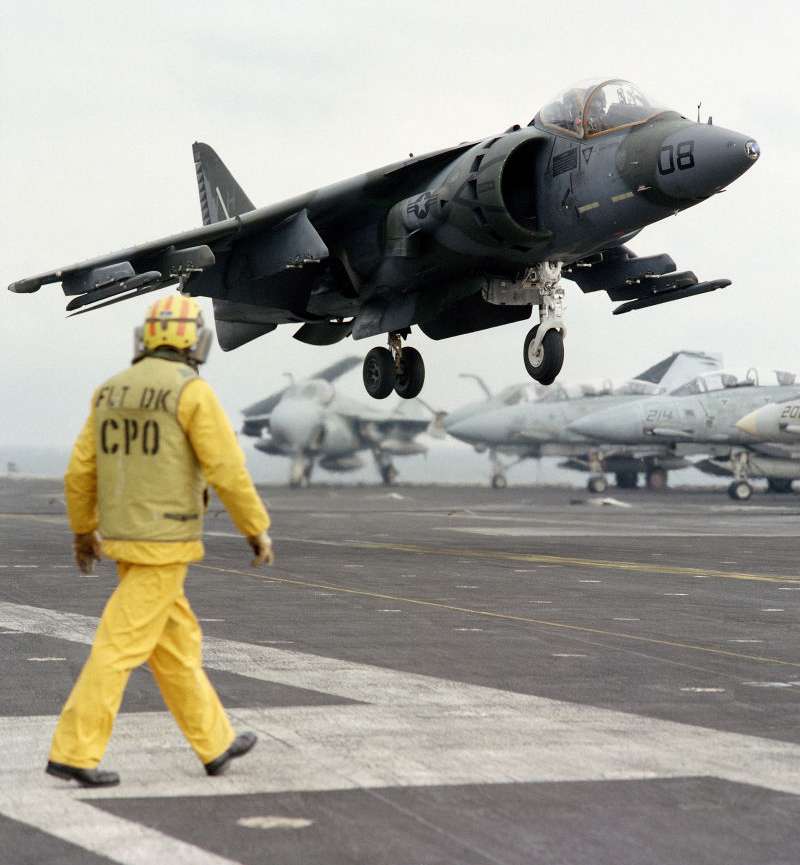 Currently the USMC plans to buy a number of C model F-35s in order to fulfill its limited carrier air wing fighter squadron contribution. But if the Navy were to successfully test the B model aboard a CVN with this landing new concept, maybe the USMC wound't have to buy any C models at all.

Here is what the shipboard rolling vertical landing looks like from the HMS Queen Elizabeth's tower's perspective, as well as a vertical landing:
Still, simulating something is different than doing it in real life consistently and in different weather conditions and sea states. Also, the whole affair relies heavily on the F-35's digital anti-skid breaking system. It would be interesting to hear what would happen if that system failed and the jet was sent careening down the deck towards the ship's ski jump at highway speeds, or even worse, into rows of aircraft parked on each side of the landing area.

If these concerns can be minimized, there is no doubt that this promising technique could expand the capability of the F-35B and the UK's new carrier force.

The F-35B is slated to begin trials aboard the HMS Queen Elizabeth next year. We will keep an eye on how this concept of operations unfolds and keep you updated.