Saudi-Qatari Row Puts The U.S. And Its Military In A Bad Place At A Bad Time 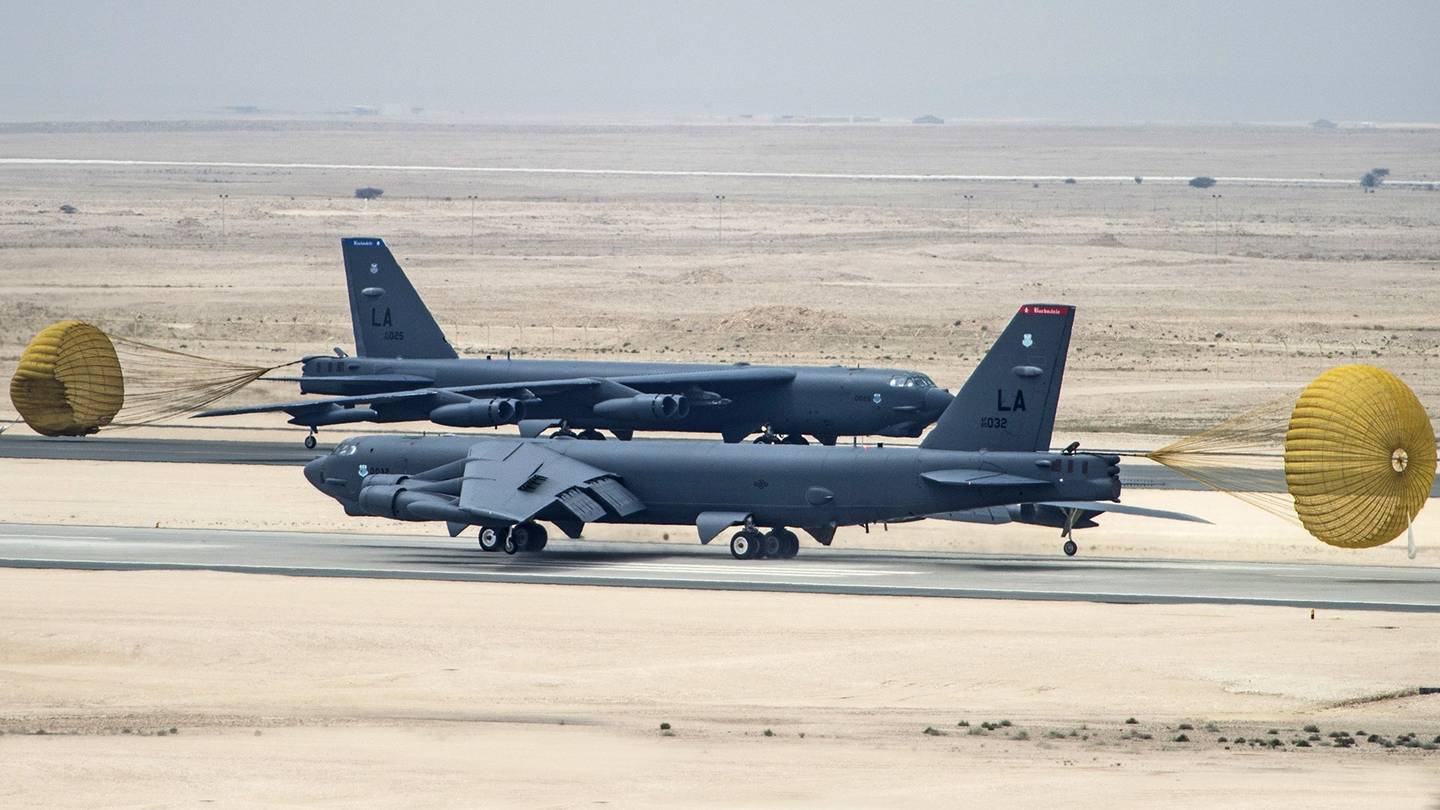 Led by Saudi Arabia, some of the most powerful states in the middle east, including Egypt, UAE, and Bahrain, have cut ties with Qatar. The fissure, which could have massive geopolitical and military repercussions, seemed sudden, but the reality is that tensions between the Kingdom and Qatar have been building for some time. Still, it really couldn't have come at a worse time for the US and its operations against extremists in the region.

In an official statement, Saudi Arabia said the following about their decision to cut all ties with neighboring Qatar:

The Kingdom of Saudi Arabia has taken this decisive decision as a result of grave violations being committed by the authorities in Doha over the past years in secret and public aiming at dividing internal Saudi ranks, instigating against the State, infringing on its sovereignty, adopting various terrorist and sectarian groups aimed at destabilizing the region including the Muslim Brotherhood Group, Daesh (ISIS) and Al-Qaeda, promoting the ethics and plans of these groups through its media permanently, supporting the activities of Iranian-backed terrorist groups in the governorate of Qatif of the Kingdom of Saudi Arabia and the Kingdom of Bahrain, financing, adopting and sheltering extremists who seek to undermine the stability and unity of the homeland at home and abroad, and using the media that seek to fuel the strife internally; and it was clear to the Kingdom of Saudi Arabia the support and backing from the authorities in Doha for coup Al-Houthi militias even after the announcement of the Coalition to Support the Legitimacy in Yemen. The Kingdom has also taken this decision in solidarity with the Kingdom of Bahrain being subjected to terrorist campaigns and operations supported by the authorities in Doha.

So Saudi Arabia is basically claiming Qatar is a troublemaker of the grandest sort. And this is not just some diplomatic warning shot, Qatar, which possess one of the largest natural gas and oil reserves in the world and has the highest per capita income of any country, is being isolated by the Arab world at breakneck speed.

Saudi Arabia closed its common land border with Qatar—which is Qatar's only land border—as well as shuttering its sea and air borders with the country. The UAE and Bahrain have closed their air and sea borders with neighboring Qatar as well, and far away, Egypt closed its airspace to aircraft belonging to the peninsular nation. As a result, Qatar has lost a whopping 82% of its gulf imports as a result of the punishing measures, and the country relies heavily on these imports to survive, especially those that come through Saudi Arabia. The various players involved have also recalled their citizens from Qatar, some on very tight timelines, and have kicked Qatari nationals out of their own territories. 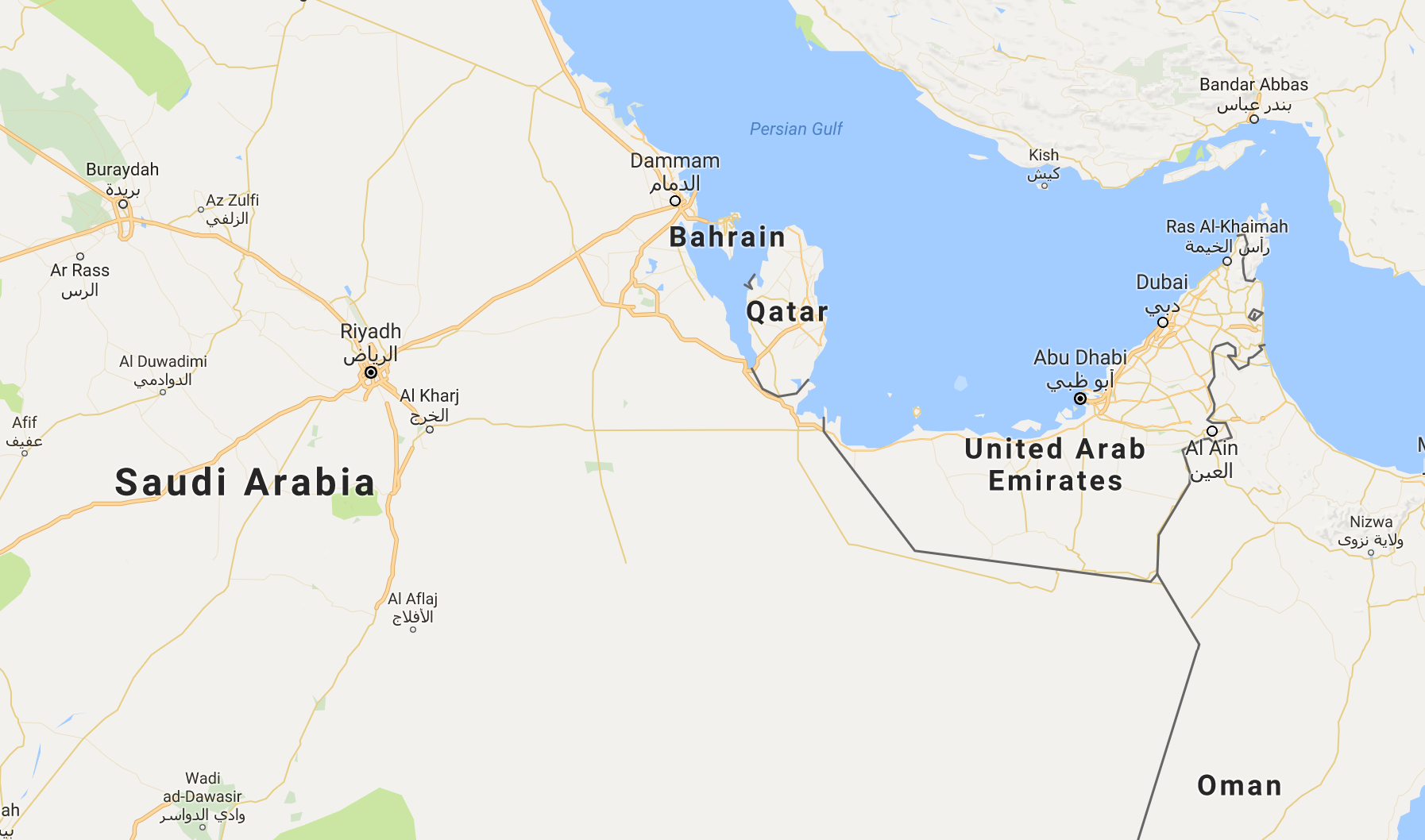 Google Maps
Accusations that Doha has been sympathetic to or even supportive of some of the world's most notorious terror groups is nothing new. Qatar has been described as "two faced," or as having "split personalities" in the past to a large degree. On one hand they host the largest and arguably the most important US military installation in the whole region, and on the other hand Qatari nationals, and even the Qatari government have been accused of being sponsors of terror, and providing a safe haven for the heads of groups that are directly related to terrorism. Even the Taliban has an office in Doha. There has also been a long standing pattern of major financiers of extremist groups living in Qatar and/or running their finances through the tiny gulf state.

— Strategic Sentinel (@StratSentinel) June 5, 2017
This all comes after President Trump's visit to Saudi Arabia, where he called on Arab states to stand against extremism and to root out terrorists and their financing at all costs. The old adage "be careful what you wish for" could ring true in this case, as the US is now thrust in between Doha and Riyadh geopolitically. It wouldn't be reaching to say that after today's actions by Saudi Arabia, the US now appears to be less hardline on extremism than The Kingdom itself.

Adding gas to the fire is a pending major US arms sale to Qatar for up to 72 advanced F-15s—one of the most powerful fighter jets in the world. The arms export deal would mean many billions of dollars for the US defense industry while also keeping a critical fighter jet manufacturing lineopen for years to come. But now the sale could also be seen as the US actively arming a government which its own Arab neighbors see as too extreme to even maintain diplomatic relations with. 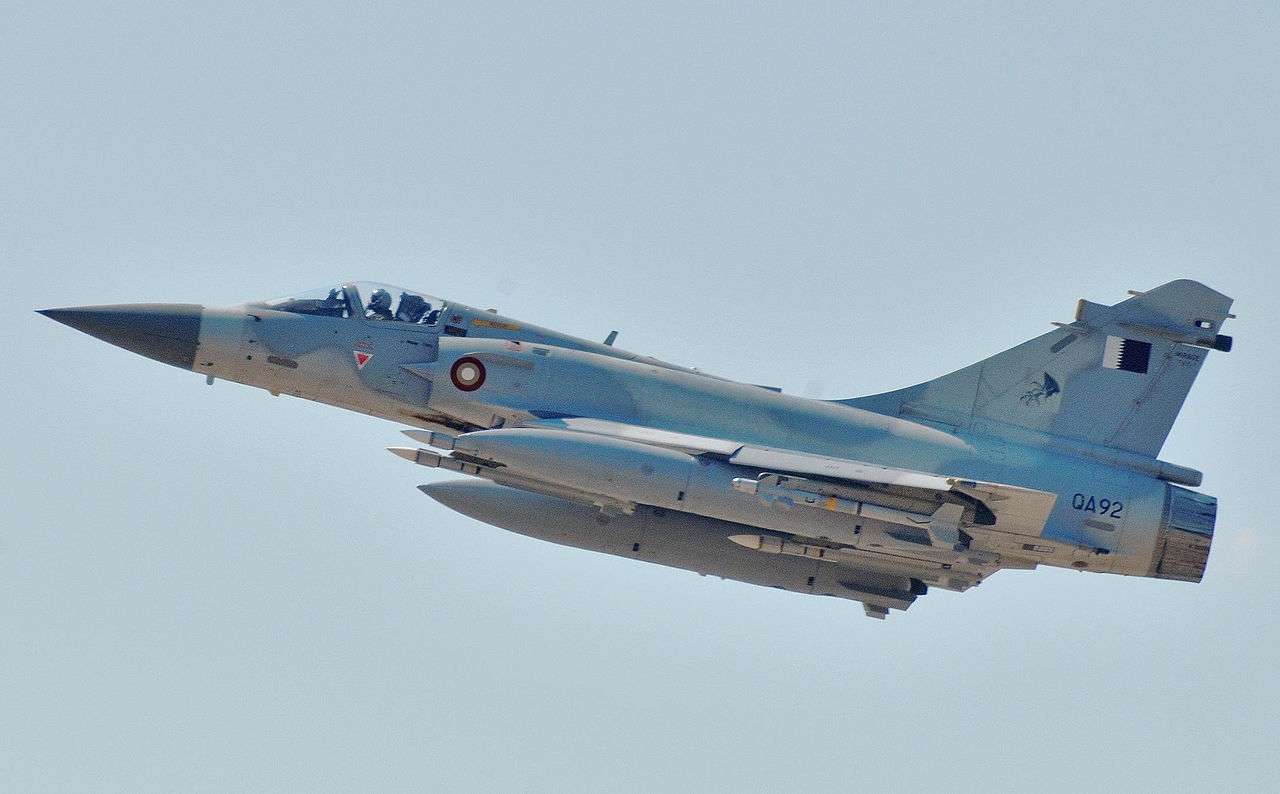 USN
A Qatari Mirage 200-5 seen here fully armed— Qatar's military is small and comparatively weak compared to other wealthy countries in the region, and they rely on their alliances, especially with the US, for protection, although major investments are now being made to drastically upgrade Qatar's weaponry and war fighting capacity.

Above all else, America's military ties with Qatar are essential to ongoing military operations in the region, including the American-led coalition air wars in Iraq, Syria and in Afghanistan. Al Udeid air base in Qatar not only houses the "brains" of America's air operations over the middle east—the Combined Air Operations Center (CAOC)—but it also hosts key support facilities and throngs of strategic and tactic assets on rotation to the region as well as thousands of US troops. Aviation assets alone include everything from E-3 AWACS, to tactical fighters, B-52 Stratofortress Bombers, to RC-135 Rivet Joint electronic intelligence gathering aircraft, to rows of tankers and airlifters. Nearby As Sayliyah Army Base is also a major logistics point for US military equipment, with massive amounts of material, vehicles and ammunition stored there in reserve status. Basically, Al Udeid air base is the strategic heart of Central Command's operations throughout the region. 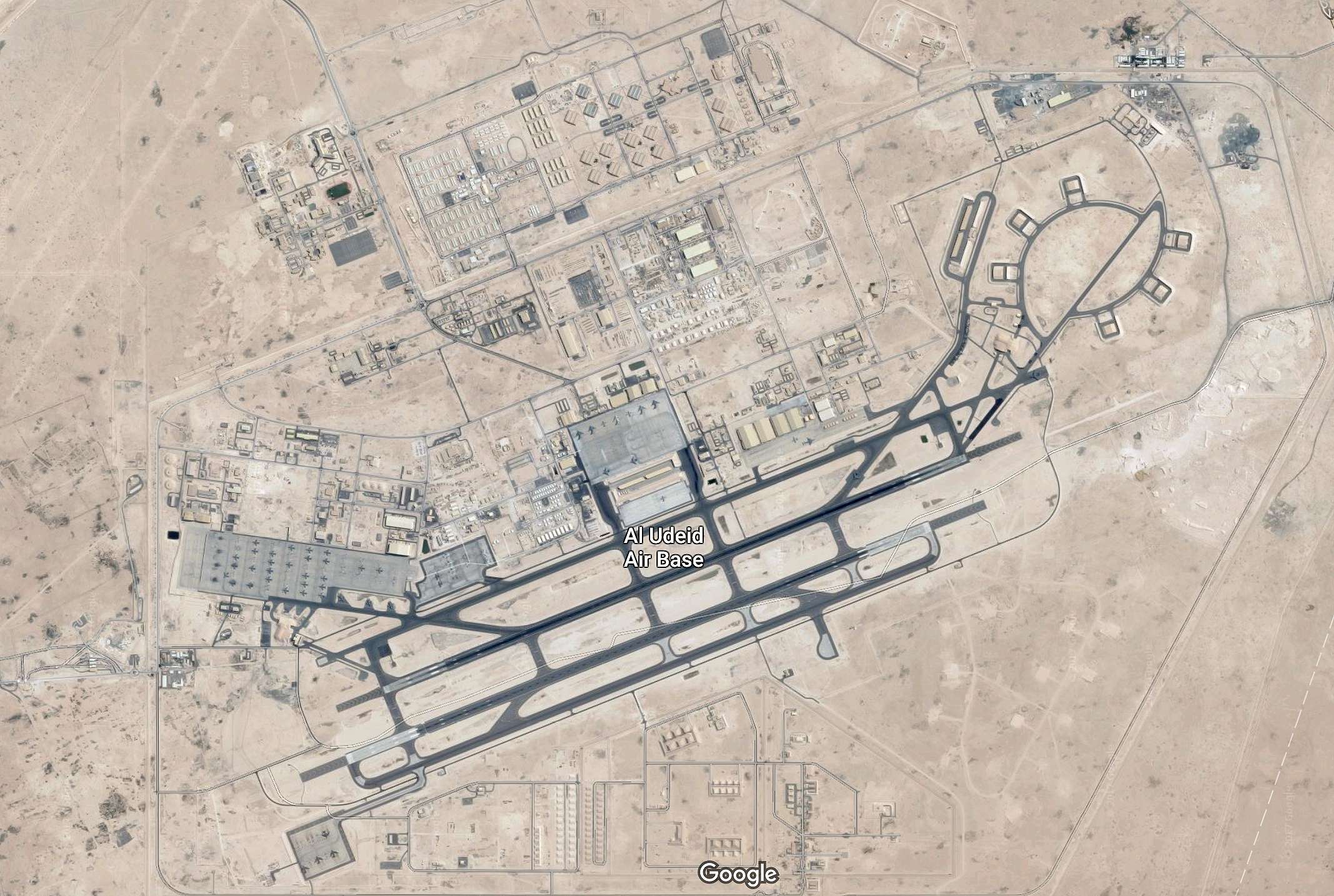 Google Earth
So what happens now? Clearly the US can't simply pack up and vacate Al Udeid Air Base overnight and move its operations elsewhere. Doing so would be a monumental undertaking and could take months, or even years to achieve. Additionally, there are few bases in the region suited for supporting so many missions and none with as well developed and as unique an infrastructure as Al Udeid.

But how can the Trump Administration preach a hardline policy against extremism to its Arab allies, who seem ready to act based on Washington's directions, while the US military continues to operate out of a country its neighbors claim is actually supporting the very same forces America's operations from that country are trying to target and destory?

Erick Irani
The growing and modern metropolis that is Doha today is totally unrecognizable compared to what it looked like before the 2003 Gulf War.

The War Zone reached out to Combined Joint Task Force Inherent Resolve to ask them what they intended to do now that the Saudis, along with neighboring Bahrain and the UAE, have drawn a line in proverbial sand when it comes to Qatar's status as a terror supporter in the region. Here is their response:

This is a political issue not associated with the Coalition’s mission of militarily defeating ISIS in Iraq and Syria. We encourage all forces to remain focused on the counter-ISIS fight and concentrate their efforts on defeating ISIS and not towards other objectives that may cause the Coalition to divert energy and resources away from this mission. The Coalition continues to work in close coordination with partner forces and allies in delivering a lasting defeat to our common enemy, ISIS. Further questions on political issues concerning these questions should be referred there or to the U.S. State Department.

By calling this a "political issue" the Pentagon must see the Saudis' claims toward Qatar as straight up false or as a matter of dubious equivalency, because it is nearly impossible to argue that those claims are not directly associated with the US-led coalition's military mission in Qatar. Especially considering that America's primary goal in the region is to stamp out the same sort of extremism that the Saudi's allege Qatar supports, even if in a tacit manner. 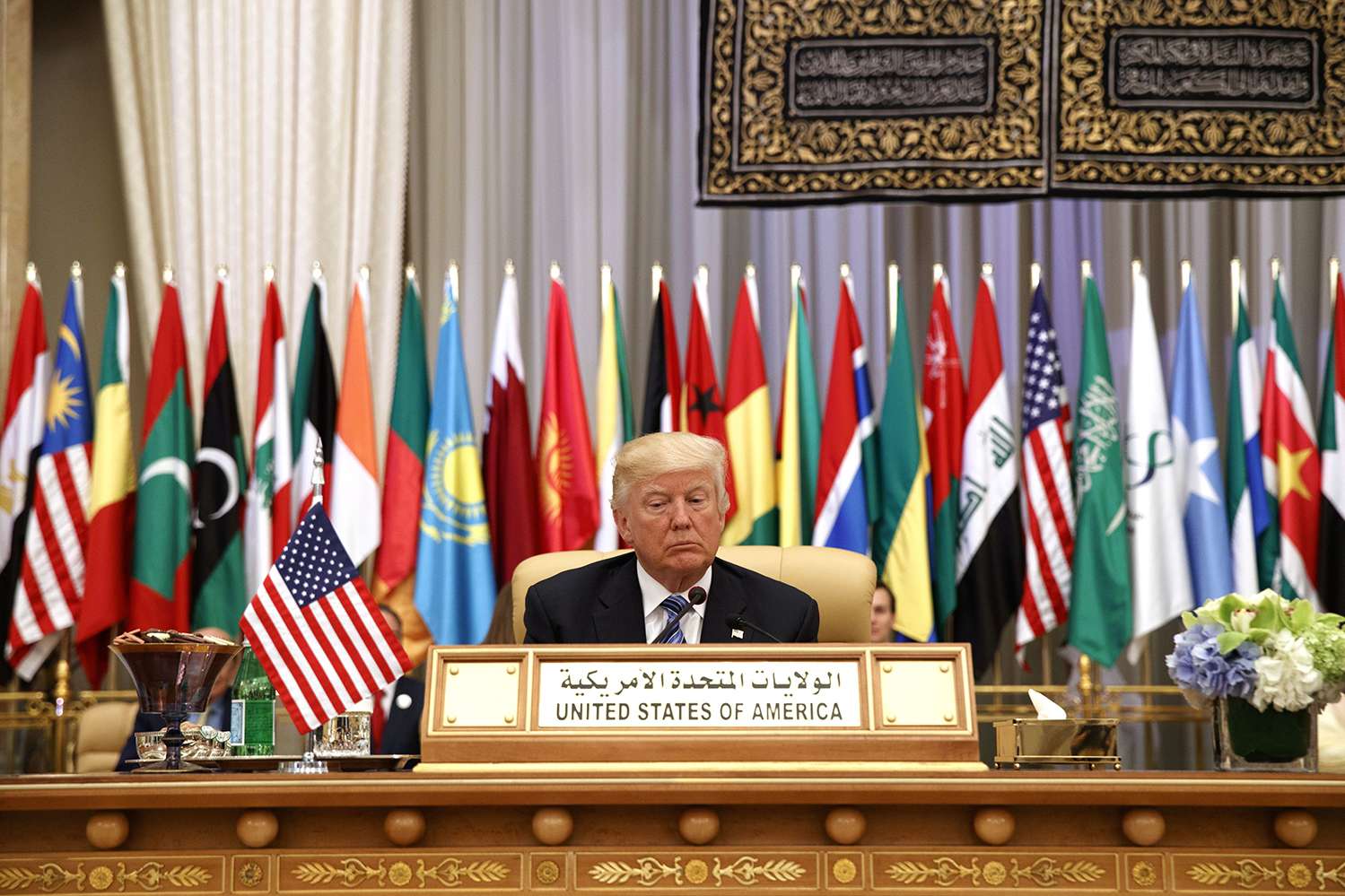 AP
Trump gave a speech on the need to combat extremism to Arab and Muslim leaders in Riyadh.

This may turn out to be a truer test of where America's ideals really lie, as well as the Trump Administration's political will when it comes to the fight against terror, as any. If these allegations are true, the US stands to only erode its moral high ground on the issue if it refuses to act. And how can America expect to ask more for the counter-terror fight from its Arab allies, like Saudi Arabia, UAE and Bahrain if it doesn't live by the same standards it preaches?

Also, Qatar depends on its alliance with the US for its own protection to a large degree as it has a small military with limited capabilities, and yet it exists in a very tough neighborhood that is bristling with arms. If the US were to leave, and were to stop selling Qatar weapons, the country would be far more vulnerable to external influences that could degrade the sovereignty it enjoys today, as well as to an outright attack. Considering its oil reserves and wealth, and its strategic location in the Persian Gulf, its vulnerability without America's support is a very real and tangible thing. Now that its own neighbors could even eventually be considered hostile, the House of Thani is probably coming to terms with this reality now more than ever. 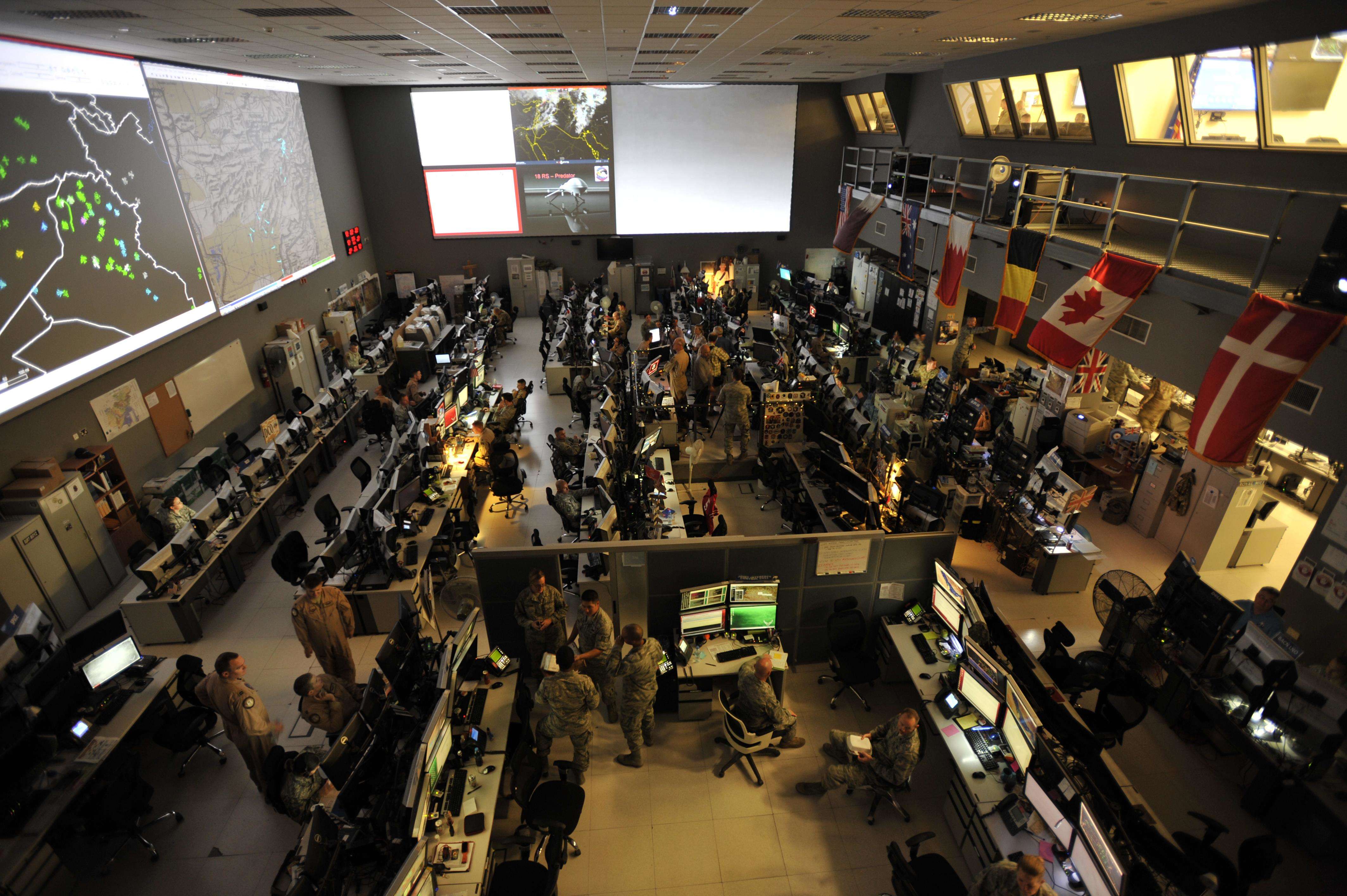 USAF
The main floor of the Combined Air Operations Center at Al Udeid Air Base.

What also remains unclear is how the US-led coalition will operate without being able to host nationals from Saudi Arabia, UAE or Bahrain at Al Udeid, nor use any services provided by those countries. This is not only a diplomatic and command and control nightmare but also potentially a logistical one as well as the US depends on contractors from those states for many support tasks that make its sprawling desert outpost in the country operate on a daily basis. Also, making military and government representatives from those countries leave the base will make coordinating everything from air and ground operations to intelligence sharing much harder than it needs to be.

With all this in mind, this move by Saudi Arabia has put the US in a precarious place to say the least, especially coming off of President Trump's visit to The Kingdom and the message he delivered there directly to Arab and predominantly Muslim countries. And it couldn't have come a worse time. In just hours, the US-led coalition and the menagerie of indigenous forces it directly supports on the ground in Syria are slated to begin the long awaited assault on ISIS's stronghold of Al Raqqa.

That high-stakes operation will be directed largely in part from America's sprawling base in Qatar.

It seems that the situation in a serious development, I didn't expect that this happened, God saved Saudi Arabia from all disrespect,

Maybe we can not see the enemies, but they are in us"
Jacob Hendricks" European defence policy in an era of renewed great-power competition

Saudi Arabia is the fifth most powerful country in the world