The UK is looking to markets that include Algeria and Japan after what has been described as a "cracking year" in terms of exports by Defence Export Services Organisation (DESO) head Alan Garwood.

He added that the value of exports in the UK was "second only to the US", with 20 per cent of the worldwide market share of the global defence export market, and said that the UK "sold more warships last year than in the last 30 to 40 years".

A sector breakdown shows that 80 per cent of UK exports were air related, with land and naval exports equally sharing the remaining 20 per cent.

Garwood described Algeria as a key export market, adding, "they say they want to do business with us".

He revealed that Algeria would be buying "several" new-build Type 23 frigates under "a sizeable contract". He also added that Algeria had "some interest in helicopters".

Japan was also cited as a key market regarding its next-generation fighter requirement.

"There's scope for technology transfer" in Japan, Garwood said, regarding the "development of an indigenous aerospace industry", adding,"[Eurofighter] Typhoon aircraft could be a vehicle for that transformation".

He added: "We've had lots of talks with Japan" and that "BAE [Systems] is leading a campaign in Japan" it [the Typhoon] would be an easy choice among the contenders".

Garwood said: "We can sell a European platform to the Japanese, we're working hard to make it [the Typhoon] attractive to Japan."

He also suggested there is further scope for Typhoon opportunities, adding that "Eurofighter is running operations as far as Japan, India and Greece". 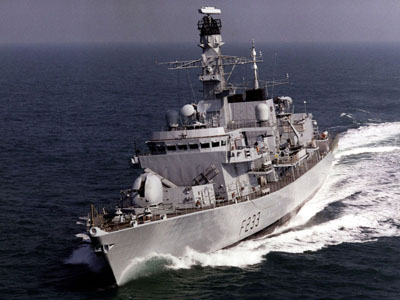