An F-35, most probably one of the Adir jets recently delivered to the Israeli Air Force, appears on Flightradar24.com: deliberate action or just a case of bad OPSEC?
On Jul. 23, an F-35 went fully visible on popular flight tracking website Flightradar24.com as it performed a mission out of Nevatim airbase. The aircraft could be monitored for about 1 hour as it went “feet wet” (over the sea) north of Gaza then flew northbound to operate near Haifa. 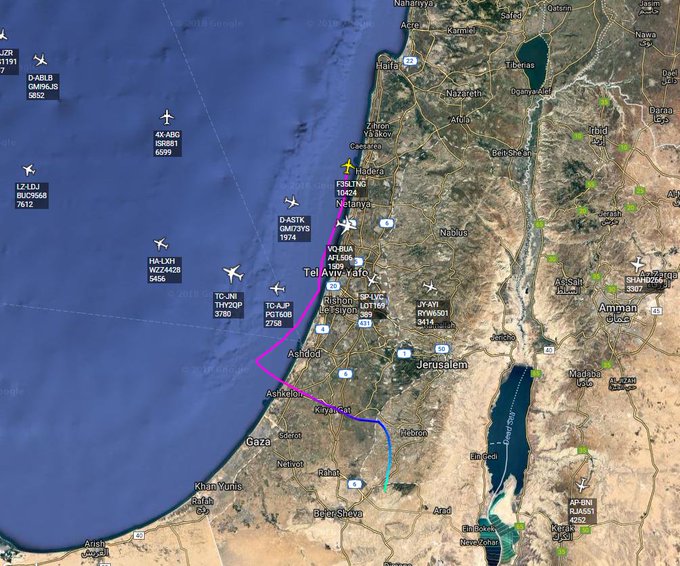 35 people are talking about this

Noteworthy, the F-35 used a US hex code (AF351F, first logged on Nov. 15, 2016 over at Live ModeS and since then regularly tracked in the US) even though it’s safe to believe it could be one of the Adir aircraft delivered to the Israeli Air Force in the last weeks. A hex code is a unique ICAO 24-bit address assigned to a Mode-S/ADS-B transponder. 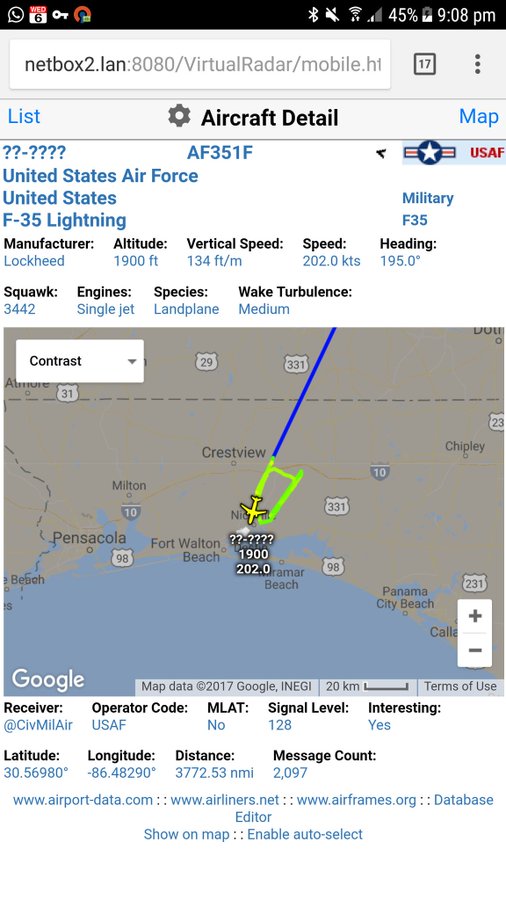 
According to Mil ModeS logs possible tailcode was 13-5067, even though this should be an F-35A that last June, based on the photographs available online, was assigned to the 6th Weapons Squadron, assigned to the USAF Weapons School, at Nellis Air Force Base, Nevada. Anyway, the F-35 flying over Israel yesterday did not broadcast its position via ADS-B but it could be tracked by means of Multilateration (MLAT). Using Time Difference of Arrival (TDOA) MLAT measures the difference in time to receive the signal from four different receivers, to geolocate and track an aircraft even if it does not transmit ADS-B data.
As we have widely explained here at The Aviationist (read here for a complete analysis):

The ADS-B system uses a special transponder that autonomously broadcasts data from the aircraft’s on-board navigation systems about its GPS-calculated position, altitude and flight path. This information is transmitted on 1090 MHz frequency: ground stations, other nearby aircraft as well as commercial off-the-shelf receivers available on the market as well as home-built ones, tuned on the same frequency, can receive and process this data.
Flightradar24 and PlaneFinder rely on a network of several hundred (if not thousand) feeders who receive and share Automatic Dependent Surveillance-Broadcast (ADS-B) transponders data and contribute growing the network and cover most of the planet.
Obviously, only ADS-B equipped aircraft flying within the coverage area of the network are visible.
Actually, in those areas where coverage is provided by several different ground stations, the position can be calculated also for those planes that do not broadcast their ADS-B data by means of Multilateration (MLAT). […]
Although the majority of the aircraft you’ll be able to track using a browser (or smartphone’s app) using the above mentioned Web-based tracking services are civil airliners and business jets, military aircraft are also equipped with Mode-S ADS-B-capable transponders: a 2010 Federal Aviation Administration rule requires all military aircraft to be equipped with ADS-B transponders by Jan. 1, 2020, as part of its program to modernize the air transportation system.
أنقر للتوسيع...

As for the reasons why the aircraft could be tracked online, there are various theories. The first one is that it was a deliberate action: considered the F-35 went “live” few hours Israel made first operational use of David’s Sling missile defense system against two SS-21 Syrian ballistic missiles, there is someone who believes the mission was part of a PSYOPS aimed at threatening Israel’s enemies (Syria in particular). Our readers will probably remember the weird, most probably bogus claim of an IAF F-35 mission into the Iranian airspace originally reported by the Al-Jarida newspaper, a Kuwaiti outlet often used to deliver Israeli propaganda/PSYOPS messages. 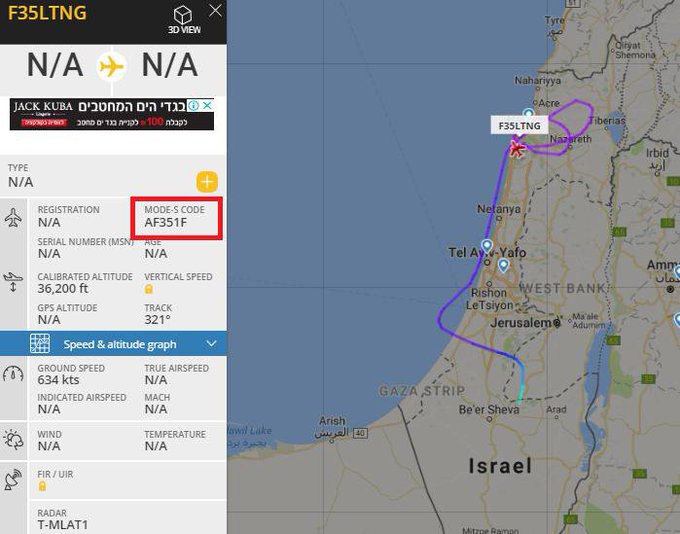 16 people are talking about this


However the Israeli Air Force has already made public the fact that the F-35 has been used in air strikes in the Middle East (Syria and another unspecified “front”) lately. On May 23, the Israeli Air Force Commander, Maj. Gen. Amikam Norkin said during a IAF conference attended by 20 commander of air forces from around the world: “The Adir planes are already operational and flying in operational missions. We are the first in the world to use the F-35 in operational activity”. He also showed a photograph of an “Adir” flying at high altitude off Beirut (with radar reflectors, hence not in “stealthy mode”). In other words, there’s probably no need to remind Syria or Iran that the Israeli Air Force has the F-35 since they are already using it in combat.
For this reason, there is also someone who believes that the first appearance of an Israeli Adir on Flightradar24 may have been a simple mistake: the Mode-S transponder was not turned off. A case of OPSEC fail in one of the most secretive air arms in the world.
Indeed, transponders are usually turned off during real operations as well as when conducting missions that need to remain invisible (at least to public flight tracking websites and commercial off the shelf receivers). Unless the transponder is turned on for a specific purpose: to let the world know they are there. In fact, as reported several times here, it’s difficult to say whether some aircraft that can be tracked online broadcast their position for everyone to see by accident or on purpose: increasingly, RC-135s and other strategic ISR platforms, including the Global Hawks, operate over highly sensitive regions, such as Ukraine or the Korean Peninsula, with the ADS-B and Mode-S turned on, so that even commercial off the shelf receivers (or public tracking websites) can monitor them. Is it a way to show the flag? Or just a mistake?