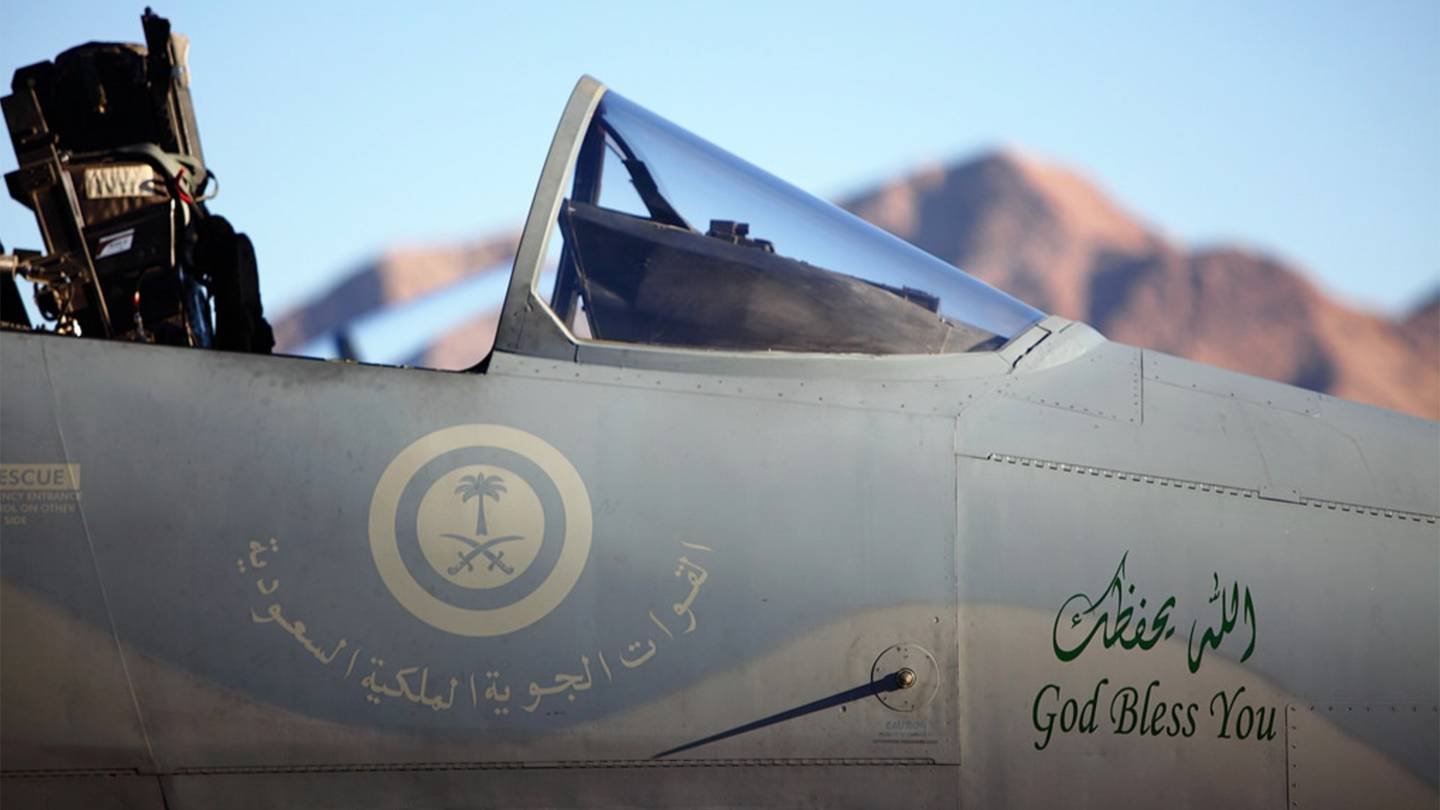 A more detailed list of the United States’ planned $110 billion arms sale to Saudi Arabia has emerged, though both parties may not ultimately move forward with all of the provisions. Still, the breakdown provides a good sense of the two countries priorities.

On June 8, 2017, Defense News first reported the specifics, based on what it described as a “White House document … authenticated by a second source.” It’s not clear how much of the list is straight from the document versus an analysis of the information it contains. $84.4 billion of the approximately $110 billion package were included in Memorandums of Intent (MOI), which are offers the U.S. government describes as being responsive to a particular country’s desire for “potential future defense capabilities.” These are deals that the U.S. government would still need to finalize and that Congress and the State Department would still need to approve.

Here is the more detailed breakdown of items from the MOIs, according to Defense News:

$2 billion for “light close air support” aircraft, with the aircraft and delivery date still unknown. It is possible that the winner of this contract could be related to the U.S. Air Force’s OA-X close-air support study.

$2 billion for four new aircraft, of a to-be-determined variety, for “TASS & Strategic ISC.” TASS stands for “tactical airborne surveillance system,” similar in concept to the U.S. Air Force JSTARS system. It's possible the replacement could be the same as the JSTARS replacement currently being considered by the Pentagon. Those would be delivered in 2024.

$6.25 billion for an eight-year sustainment deal for Saudi Arabia's fleet of F-15 fighters, with another $20 million for an F-15 C/D recapitalization program study.

$2 billion for an unknown number of MK-VI Patrol Boats, with an unknown delivery date.

$6 billion for four Lockheed Martin-built frigates, based on the company’s littoral combat ship design. That order falls under the Saudi Naval Expansion Program II (SNEP II) heading, with planned delivery in the 2025-2028 timeframe.

$18 billion for C4I System and integration, with no further details given on what that means, nor with a delivery date offered.

The big ticket items are unsurprising. More than $40 billion is devoted to modernizing Saudi Arabia’s Air Force, a continual priority for the Kingdom as it tries to maintain its qualitative edge in the region, especially with regards to Iran. 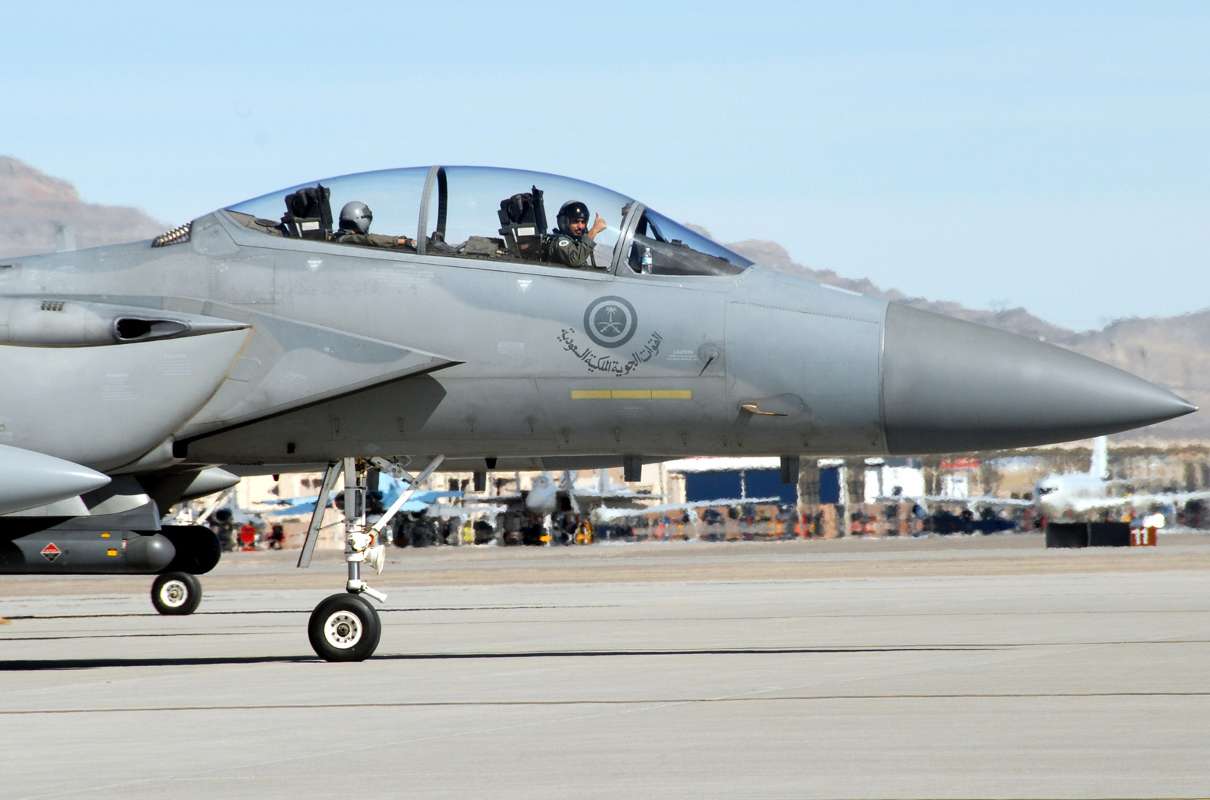 In December 2016, four Boeing F-15SA multi-role fighters out of an 84 jet order touched down in Saudi Arabia. The country also ordered 70 upgrade kits, mainly for its existing fleet of F-15S models. So it’s not surprising the United States would be keen to offer a support contract for the entire fleet, in addition to studying ways to bring its older versions up to the latest standard. The F-15S and SA aircraft can carry impressive amounts of precision guided munitions, such as the laser-guided GBU-10/B and -12/B Paveway and GPS-guided GBU-31/B and -38/B Joint Direct Attack Munition (JDAM). There are no additional sales of controversial cluster munitions mentioned in this list.


The Kingdom has also long been interested in upgrading its existing three RE-3 Tactical Airborne Surveillance System (TASS) aircraft. One of these, the sole RE-3B Improved Tactical Airborne Surveillance System (ITASS), was actually a conversion of the Joint Surveillance Target Attack Radar System (JSTARS) prototype. The resulting aircraft reportedly combine some of the surveillance and targeting features of the JSTARS radar aircraft with a signals intelligence suite akin to the RC-135V/W Rivet Joint, giving the aircraft more of a dual role. It is unlikely therefore that they would be willing to accept the product of the U.S. Air Force’s JSTARS recapitalization program without significant modifications.

There is also an order for 30 MH-60 rescue helicopters as part of the deal. This could end up being the sameHH-60W configuration that is set to replace the HH-60G Pave Hawk.

The desire for a light close air support aircraft is not surprising either, given the Kingdom’s protracted and grueling intervention in Yemen, as well as is expansive and sparely populated borders. Whether they will actually decide to wait for the results of the OA-X program, which remains nebulous as to its own actual goals, is uncertain. The Saudis had been helping fund the modernization of Lebanon's military, which now includes the purchase of Embraer’s popular A-29 light attack aircraft and the government in Riyadh has strong ties to Jordan and the United Arab Emirates, both of whom operate armed derivatives of agricultural aircraft. Officials in Riyadh are well aware of their options. The C-130J cargo aircraft and KC-130J tankers would replace about half of Saudi Arabia's existing fleet of C-130H and KC-130H models. 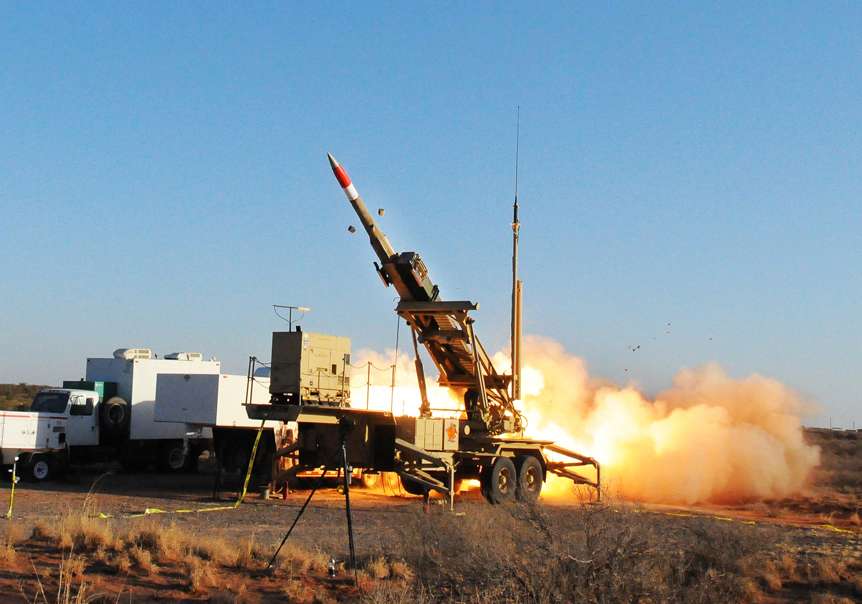 US Army
The U.S. Army tests a modified Patriot Advanced Capability-3 missile in 2013.

Air and missile defense are the next big winners, with $13.5 billion for seven full batteries of Terminal High-Altitude Air Defense (THAAD) systems and more than $6.5 billion more for improvements to the Kingdom’s existing Patriot units. Neither of these purchases would be surprising, as Saudi Arabia has seen an increasingly real threat of ballistic missile attacks not just from traditional opponent Iran, but also Yemen, where rebels have taken control of that small country’s stockpile of Scud missiles and claim to be building their own derivatives.

The THAAD package would likely include the mobile AN/TPY-2 radar. Though neither Raytheon nor the Pentagon have made the exact range of the system public, it may be able to track targets more than 1,800 miles away. If true, these units would be able to see deep inside Iran or Yemen from well within Saudi Arabia. There’s also more than $4 billion set aside for space-based capabilities, including remote-sensing and early warning satellites, as well as expanding the Saudi military’s satellite communication coverage.

Could the Saudis be purchasing their own Space-Bases Infrared System (SBIRS) like satellite to augment their anti-ballistic missile capabilities? Doing so would give The Kingdom earlier warning of ballistic missile launches that the AN/TPY-2 radar cannot provide. It could even possibly detect other events, like artillery fire. Then again, this investment could give access to data from U.S. early warning satellites that are already constantly scanning the region. 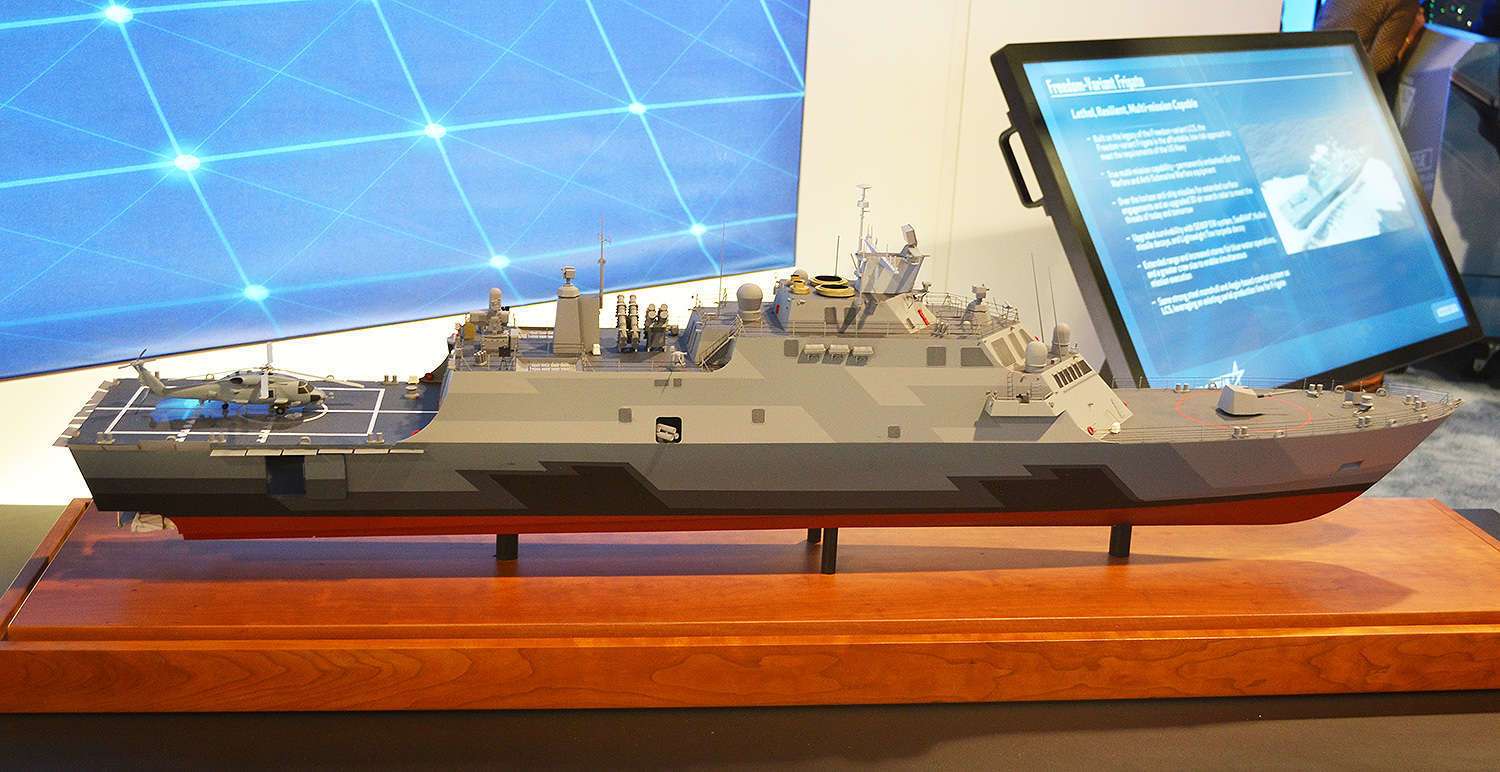 Joseph Trevithick
A model of a the Freedom-variant frigate Lockheed Martin has offered to the U.S. Navy, similar to the proposed MMSC.

More notably, the Saudi Navy, traditionally the country’s “fourth service” behind the Air Force, Army, and the independent Saudi Arabian National Guard, has beaten out the country’s land forces. There is $6 billion for a more capable derivative of Lockheed Martin’s Freedom-class Litorral Combat Ship (LCS) know as the Multi-Mission Surface Combatant (MMSC), another $2 billion for a previously approved deal for much smaller Mk IV patrol boats. 14 MH-60R Seahawk helicopters are also on order.

Most importantly, there is $18 billion for the Royal Saudi Navy’s extensive planned C4I command and control and intelligence sharing network. This project includes a host of upgrades to facilities, hardware, and software that support naval forces afloat and ashore, including the country’s small marine and naval special warfare contingents. The War Zone has already extensively reported on the Kingdom’s desperate need to update its relatively small and outdated naval arm.

USN
A breakdown of the FMS case for the Royal Saudi Navy's C4I program, as of 2014.

The Army comes in last with less than $10 billion for upgrades to its fleet of 400 Bradley Fighting Vehicles and 180 howitzers of unspecified type or caliber. 26 AN/TPQ-53(V) Radar Systems, along with training and support is also included. The mobile system built around a large AESA radar system provides directional or 360 degree surveillance for rockets, artillery and mortars. Aircraft and drones can also be detected and tracked. The system can cue counter-battery fire and short-range air defense systems.

Some additional items, including hundreds of Black Hawk helicopters, were reportedly included in separate “LOAs,” or Letters of Offer and Acceptance, a part of the U.S. government’s formal Foreign Military Sales process. Both LOAs and MOIs sometimes only specify a generic category of equipment rather than a particular system. This helps explain why some entries are specific, while others are just generic weapons such as “howitzers.”

Foreign parties can reject these offers even if they meet the basic requirements outlined in the initial request. After agreeing to the LOA, the Pentagon runs the contracting process, which could include the items as part of a larger purchase for multiple parties, though the country in question ultimately pays for their agreed upon portion of the deal.

Congratulations, it will add a qualitative leap to the Saudi armed forces across the region. In fact, the most striking thing is the navy, with Saudi Arabia getting a MMSC and future development. :b


Ethan قال:
It is good that Saudi Arabia has entered into a partnership with Raytheon, but the most important question is whether Saudi Arabia will equip its ships with AMDR ? :b
http://www.raytheon.com/capabilities/products/amdr/
I don't think China has such a technology