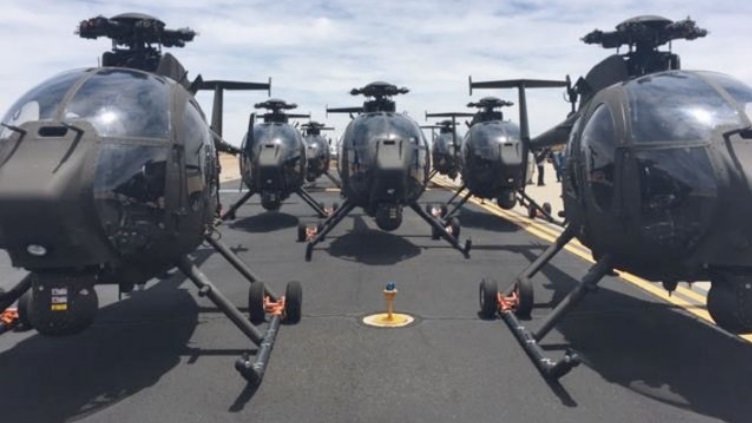 The first Boeing AH-6i Little Bird light attack and reconnaissance helicopters for Saudi Arabia have arrived in-country, the US Army confirmed to Jane's on 5 June.

Of the first batch of 12 helicopters for the Saudi Arabian National Guard (SANG), nine have been delivered. The remaining three have been temporarily retained in the United States for training purposes, and will be followed at a later date to complete the current order of 24 helicopters.

The commencement of deliveries to Saudi Arabia comes some 10 months after the SANG formally accepted the type in August 2016. The 24 helicopters on order will be used to equip the 1st Aviation Brigade fully at Khashm Al An airfield near Riyadh, and the 2nd Aviation Brigade at Hofuf on the country's east coast. The SANG is also standing up and the 3rd Aviation Brigade, Aviation Support Brigade (ASB), at Jeddah on the west coast, and a training unit designated the 4th Aviation Brigade is being stood up at Dirab, on the outskirts of Riyadh (this unit will likely be equipped with the 12 MD Helicopters Inc MD 530F training helicopters that were delivered in 2013).

The SANG currently has 24 Sikorsky UH-60M Black Hawk transport helicopters (plus eight to be upgraded to this standard), 12 Boeing AH-64E Apache Guardian attack helicopters, and 24 AH-6is under contract. With the Black Hawk and Apache deliveries already complete and those of the AH-6 just now beginning, further orders of all types (and perhaps even new types) are likely as the SANG looks to field 156 aircraft by 2023.